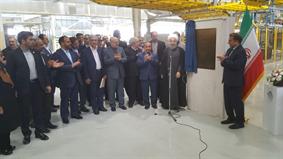 The production line of Samand has been officially opened in Iran's north central province of Semnan.

The line established by hard-working engineers of Iran Khodro Company (IKCO) as well as private sector investors was inaugurated in an official ceremony attended by Iranian President Hassan Rouhani, Minister of Industry, Mine and Trade, Mohammad Reza Ne’matzadeh, IKCO CEO and other state and provincial officials.

The line is expected to produce 20 vehicles each day during the first phase of its operation.

"Farda Automobile Manufacturing Co." from private sector has signed an agreement with IKCO to produce 6,000 Samand vehicles in the current year.

The company with over a billion dollar investment of the private sector is established in close cooperation with IKCO on a plot of land of 50 hectares in the city of Semnan.

This auto manufacturing company (Iran Khodro Semnan) has been ceded to the private sector in terms of the Article 44 of the Constitution of the Islamic Republic of Iran.

As one of IKCO’s bestselling vehicles, Samand is highly popular in Iran and some of the regional export markets of the company.

Produced in two classes of B and C, different models of Samand are currently produced and sold inside and outside of the country.