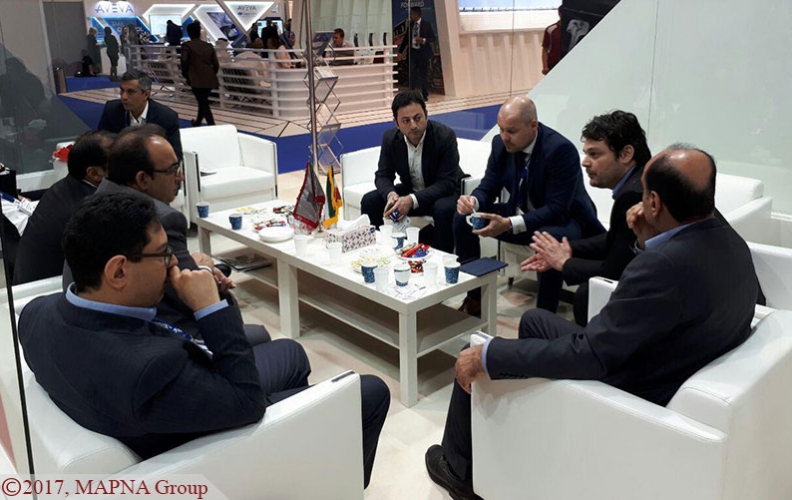 On 7-8 March, the city of Dubai was host to the eleventh edition of the Middle East Rail 2017 exhibition.

Called the largest gathering of rail actors in the Middle East, the exhibition serves as a platform serving the railway sector in the region, promoting development of a market with a value of 350 billion USD.

With its plan to expand railway business overseas, MAPNA Group took part in the Middle East Rail 2017 for the second time in order to display its diverse capabilities which currently include locomotive engineering and manufacturing, railway operation and development, and maintenance and repair, and to lay the groundwork for partnership with big names of the business in domestic and overseas projects.

Representatives from various companies visited MAPNA booth, located at Sheikh Saeed Hall in Dubai International Exhibition & Convention Centre, to become acquainted with MAPNA’s activities in the rail business, its capabilities and ongoing projects, the state of railway industry in Iran, and opportunities for participation in Iran’s railway projects in collaboration with the company.

“In the regional market, our focus is on maintenance and repair sectors for locomotives and rolling stock” said Dr. Reza Javaheri, Marketing and Sales Deputy of MAPNA Rail Division, on the group’s mission in the exhibition. MAPNA rail division recently won a tender for rehabilitation of 50 units of Alstom locomotives, to be added to Iran’s rail sector under an ROO (repair, operate, own) contract scheme.

As the only Iran-based exhibitor of the expo, and one of a handful of companies from MENA (Middle East and North Africa) which offered technical services, MAPNA hosted officials from European, Asian, and regional companies, among others. Talks were also held with Indian and Chinese companies, who showed strong presence in this year’s Middle East Rail exhibition. With their fast-growing economy, India and China, the two most populated countries of the world, are seeking access to markets in the Middle East and Europe, and Iran’s role as a key link implies ample opportunities for MAPNA Group as a major rail actor of the country.

Speaking to MAPNA Media Department correspondent, Seyyed Ali Bani-Hashemi, CEO of MAPNA Rail Division, called Middle East and North Africa preliminary target markets for MAPNA to enter the regional and international competition in the rail industry. Operation and maintenance, and sale of locomotives, were MAPNA’s key goal regarding the reginal market Mr. Bani-Hashemi stated. Rail Division CEO dubbed Egypt a potential market for MAPNA Group due to similarities in specs of the railway systems of the two countries. “MAPNA has plans to enter the services sector of urban metro in near future” Mr. Bani-Hashemi added.

The composition of keynote speakers of the expo demonstrated the organizers’ determination to render Middle East Rail 2017 into an international locus for rail business. The first day of the event started with a speech by UAE’s Minister of Infrastructure Development Abdullah Belhaif Al-Nuaimi, and continued with speeches by Secretary General of Persian Gulf Cooperation Council, and rail ministers of Britain and India. Sheikh Mohammed bin Rashid Al Maktoum, Emir of Dubai, paid a visit to the exhibition on the first day.

Companies showcased their latest technological achievements on the first day, from the latest software for analysis and usage of big data in railway, to high-speed trains and to hyperloop mode of transportation.

The two-day expo ended on the evening of Wednesday, March 8th. The next edition of the Middle East Rail will be held on 12-13 March, 2018, also in Dubai.