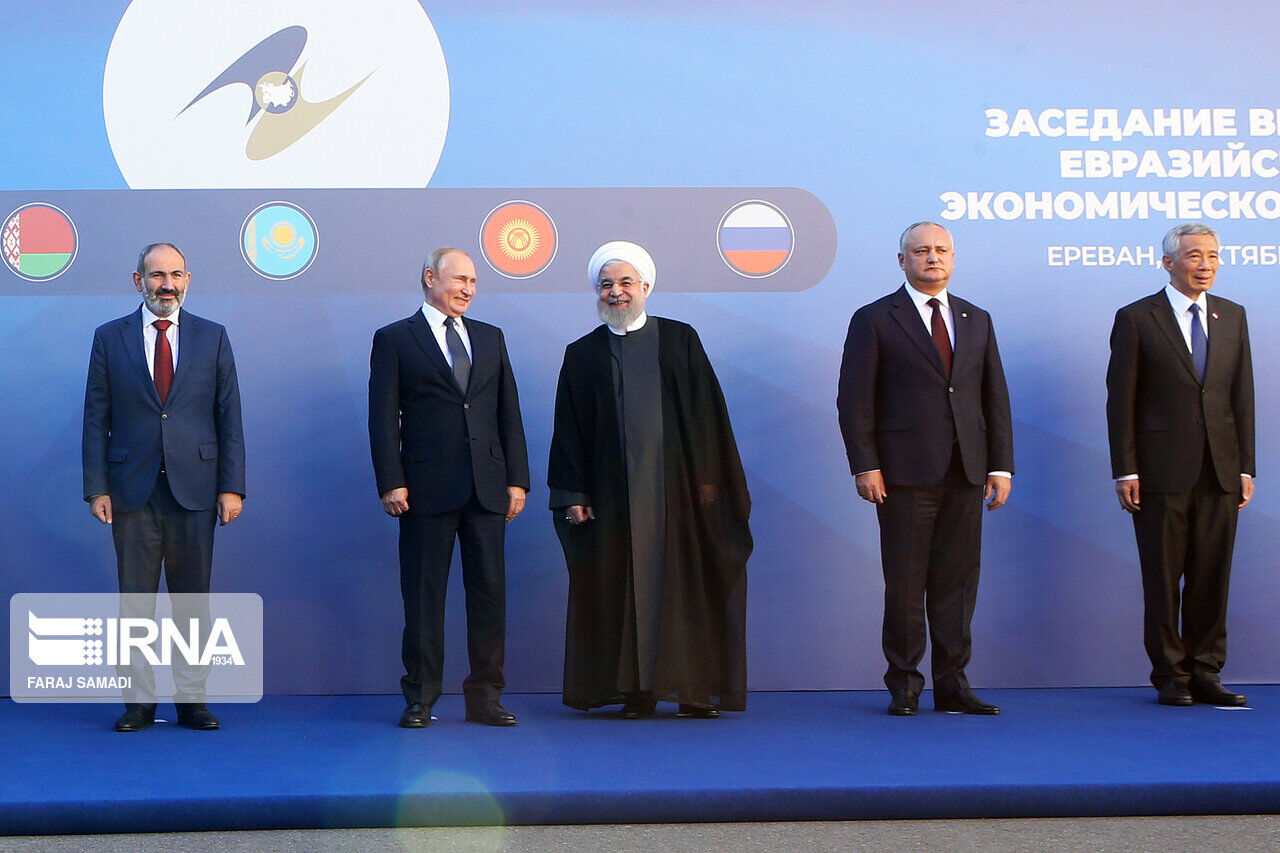 Tehran, Oct 4, IRNA - An expert on Central Asia affairs says Iran's joining the Eurasian Economic Union (EAEU) will receive a variety of special customs privileges from northern countries, which could help boost the economy's growth in the field of Iran's non-oil exports.

Rouhani's main goal in traveling to Yerevan was to expand and activate Iran's economic ties with the Eurasian Union.

Rouhani’s government in 2015 offered to its northern neighbors, who formed the Eurasian Economic Union, to accept Tehran to join as well; a proposal that was welcomed due to Iran's position in the region after two years of intense negotiations.

With Iran joining the EAEU, Russia, Armenia, Kazakhstan, Belarus and Kyrgyzstan agreed to import hundreds of tons of goods from Iran at preferential or sometimes zero tariffs, a new opportunity for our country's exporters to expand the market and grow non-oil exports.

Given the importance of the topic, IRNA interviewed Bahram Amir Ahmadian, an expert on the Caucasus and Central Asia.

Amir Ahmadian stated that the Eurasian Economic Union is a regional union between the northern neighbors of Iran and its history goes back to the past.

The member states of this union have extensive trade exchanges with each other. It is worth noting that Russia, as a major regional country, has about  $500 billion in trade with the world and is not comparable to Belarus and Armenia. With the formation of this economic union, member states are looking for economic and investment exchanges. Now, given the conditions of the Islamic Republic, and the US propaganda against our country which has made difficult to return export funds, economic exchanges with the member states of the Union can help Iran boost its economy.

The Eurasian Economic Union to cut to zero tariffs on more than 500 commodities, the university professor said. Iran's membership in the union helps export of goods. In the past, there were many tariffs by Russia on Iranian goods, and it was not virtually economical to export goods, because when the tariffs are high, the possibility of exporting to a country with tariffs does not compete with countries that do not pay these tariffs. When our country's commercial facilities are provided and tariffs are eliminated, our manufactured goods can be exported and can compete with other exporting countries.

Three members of Eurasian Economic Union namely Russia, Iran, and Kazakhstan are exporting oil, gas and energy although these economies are not complementary, to some extent we can meet the region's food and light products needs, including apparel and home appliances which provide Iran's economy a chance in this regard. Another advantage is that by producing cheap labor forces, we produce cheap goods that can compete with other countries and create opportunities for trade and employment for our country.

Amir Ahmadian, referring to the trade of the union through its national currency, said that the main advantage of the Eurasian Union is to exchange goods via national currencies and this is a very important aspect of reducing tariffs and there are also goods with zero tariff, but the revenue gained from the sale of goods to the countries of the Union can only be used in this region and cannot be traded in world markets with this currency.

Given to Rouhani's visit to Armenia, the expert highlighted that Rouhani's visit to Armenia creates new conditions for Tehran-Yerevan to increase economic ties. Armenia has diplomatic relations with us and has no relations with Turkey. Armenian businessmen and Turkish have informal exchanges more than formal exchanges with our country. The market is not looking for perspective only important is to make money. The competitive market in Eurasia is the same. Exporting Iranian goods to the Eurasian Economic region should be done by land, and the advantage of this transfer is that it reduces the price of goods and we can export cheaper goods.

We can use the maritime border with Russia and Kazakhstan in exporting goods, but to trade with Tajikistan and Kyrgyzstan we have to cross the Turkmenistan border, which has created problems for our transit and with high tariffs on goods, is increasing the marginal cost of the product. It is in the interest of trade with Armenia because it does not have access to other countries in the region just through Iran. Its economy is not so big. Our level of trade with Armenia has not been restricted. Armenia has the highest level of trade with Iran, but Armenia's share in our foreign trade is not significant.

Amir Ahmadian reiterated that Russia's export to Iran is less than one percent. Russia has about $500 billion in trade with the world, and more than 90% of Russia's trade is outside the Eurasian Economic region. By joining the Eurasian Economic Union, Iran can play an intermediary role in exporting Russian goods to southern Iran and accessing high seas.

With our country subject to cruel US sanctions and difficulty in accessing dollars for economic exchanges for our country, we can export and import with our national currency to have a dynamic and active export and import and our domestic factories that have stopped production with the production of light industry and food industry can make economic prosperity. This is a historic opportunity for Iran and the Eurasian Economic Union as well.

At the end of the interview, Amir Ahmadian concluded that given to “One Road, One Belt” initiative and revitalization of the old Silk Road for linking with China we have to act through Central Asia. One side of this equation is Kazakhstan. It is an active sate in the Eurasia and we must work with the country in “One Road, One Belt” plan. The key point in this plan is Turkmenistan. If we want to work together on “One Road, One Belt” with Kazakhstan, we must exert pressure on Turkmenistan through Kazakhstan and China to facilitate trade with our country and collaborate with Iran in the north and south corridors to facilitate economic exchanges.