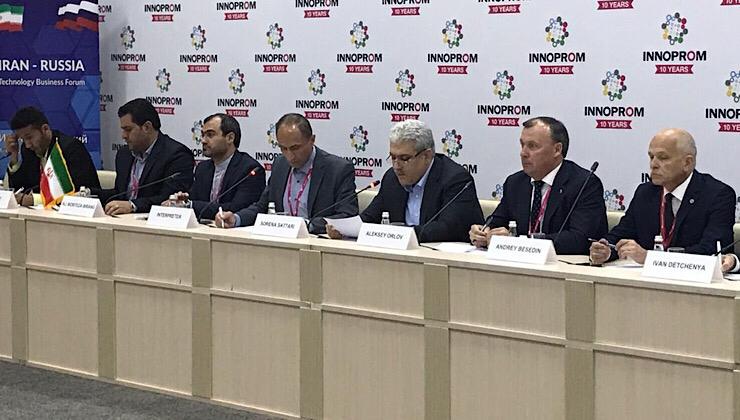 On the first day of his travel, Sattari emphasized that Iran has aimed to create dynamic and constructive relations at the global level by relying on its own abilities. In this regard, he stated: Russia has provided extraordinary opportunities for the development of economic and political relationships of Iran, and we have attempted to create similar cooperation opportunities for Russia.

According to the public relations and information center of the Vice-Presidency for science and technology affairs, Yekaterinburg, which is one of the most important cities of Russia located on the west of the country, hosts a large number of knowledge-based companies and authorities of Iran. Sorena Sattari, the vice president for science and technology affairs, is present as the head of a high-ranking authority.

Today, he attended the exhibition of industrial and technological achievements of Russia entitled “Inoprom” and presented a speech in addition to visiting the mentioned achievements.

At first, Sattari considered Russia as a powerful political and economic poles in the vicinity of Iran, expressing that this country has been our friend and has provided remarkable opportunities for developing economic and political relations. Iran has attempted to rely on these suitable relations to provide similar cooperation opportunities for Russia.

Sattari pointed out the significant changes and improvements in various areas of the world, adding: the technological progresses of other countries, emergence of new diseases, regional and international environmental problems, necessity of innovation space sciences, necessity of attention to optimization of energy consumption, the need for applicability of cognitive sciences and the need for increase of productivity and economic competition have strengthened the determination of the two countries for more cooperation in area of new technologies.

The president of the national elites foundation continued: therefore, cooperation between Iran and Russia in the technology and innovation field has been followed up in the past few years through a special structure, which shows the importance of technological interactions and insistence on strengthening the level of bilateral relations in this section. We hope that new knowledge and technologies, such as nanotechnology, biotechnology, aerospace sciences, cognitive sciences, and new energies will accelerate the pace of progress in this geographical area in the near future.

Sattari regarded the presence of 70 Iranian knowledge-based in Inoprom Exhibition a great opportunity for meeting with companies and industries of Russia. This event is carried out to solve problems of technological cooperation. In this regard, he continued: as the most important exhibition of industrial and technological achievements of Russia, this exhibition is a great place for the identification of new technologies created in Russia. Iranian companies can use this opportunity to develop businesses and recognize commercial partners. Over the last years, Iran has had pavilions in Inoprom, and Iranian companies have used this opportunity to showcase the technological achievements of Iran.

In another part of the speech, the vice president for science and technology affairs mentioned the activity of more than 4400 knowledge-based companies in Iran, stating: these companies provide technologies for you that can be presented in international markets in addition to the domestic market in case of joint investment for mass production.

The activity of the Best Startups of the Region in Iran

Sattari also mentioned: today, the largest internet network of electronic commerce is active at the level of the Middle East in Iran, which has 90% of the share of the online retail market. More than 1000 product supplier and 11000 sellers have yielded a sale rate of more than millions of dollars in a day. This website is among the top 200 websites in the world. You can imagine what a special opportunity has been provided to Russian producers to enter this large market to provide goods through an online database.

He also pointed out the significant presence and activity of Iranian website and startups in the field of art and culture, asserting: technology has provided a special phenomenon to develop the cultural relation. Therefore, Russian companies can use internet packages, some of which are among the 100 most viewed websites of the world to advertise and introduce commercial and cultural products and companies.

The vice president for science and technology affairs also explained that Iran has been properly developed in fields of software and apps in areas of cyber security, ERP, integrated planning and Internet of Things.

The fintech area was another issue pointed out by Sattari in Inoprom exhibition. In this regard, he claimed: we have provided useful apps in the fintech field, application of which has decreased the volume of referrals to banking, stock exchange, and insurance networks and has facilitated the financial interactions between networks. In addition, it has changed the pattern of traditional payment to online payment. These apps transfer tens of millions of dollar daily and accelerate financial interactions. We hope that these relations lead to the formation of a joint foundation for online payment and provision of new business services between information technology companies of Iran and Russia.

Considerable Progress of Iranians in Field of Drugs

The president of the national elites foundation pointed out the considerable progress made in the field of drugs by knowledge-based companies, mentioning: today, people of Russia, Turkey, and other regional countries are treated with anticancer and anti-inflammatory biotechnology drugs of Iran. The achievements of an Iranian company that treat four incurable diseases through stem cells are remarkable in the west of Asia and there is no similar company in the region at this level.

Technology for the development of advanced equipment such as surgeon robots, linear accelerators, dosimeter devices, radiofrequency systems, and diagnostic cyclotrons are developed by knowledge-based companies in Iran and serve the health sector of the country.

He also talked about the activities of some companies in Iran who have been offering a product for the definitive treatment of chronic migraine headaches in a field of herbal medicines. Another company has manufactured herbal ointments to prevent amputation of the foot of diabetic patients, bedsore infection, and burns.

Pointing out that Iran has aimed to establish dynamic and constructive relations and cooperation at the global level by relying on its abilities, Sattari asserted: the importance of this travel and our motivation are highlighted with my presence here as the vice president for science and technology affairs of Iran along with 70 technological companies working in various fields such as health, information technology and communication, engineering services, electronics, and chemical compounds.

At the end of his speech, Sattari expressed hope that this presence will be turned into a turning point in bilateral economic cooperation. In this regard, Iran fully supports the joint programs of the two countries to develop technologies and markets.

Sorena Sattari, the vice president for science and technology affairs, traveled to Russia for four days as the head of a high-ranking scientific and technological delegation encompassing 70 Iranian knowledge-based companies. This trip is carried out with the support of the international exchange center and the Iranian national science fund along with Inoprom exhibition of Russia. During the trip, the representatives of knowledge-based companies will meet their counterparts in Moscow and Yekaterinburg, Russia. In addition, representatives from the ministry of foreign affairs, trade promotion organization, Iranian national science fund, ministry of science, research and technology, and ministry of health, treatment and medical education accompany Sattari during this trip.