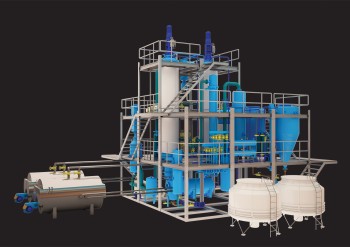 Model :
Description :
We design, manufacture and install the used oil re-refining line by Vacuum Thin Film evapora n in the form of EPCF . This process is done continuously without using any acid or clay additives and is very affordable and economical. The based oil produced in this way, corresponds to both, API and ACEA standards. This is an appropriate feed for formulating of wide range of oils used for: car engineens, turbines, hydraulics, gears, greases and so on. Using this technology, by controlling the temperature and pressure,various lube cuts such as SN150, SN350, SN500 and some others can be produced. The importance of Used Oil Re-refining Re-refining, apart from being financially motivated, is environmentally friendly, but the recycling helps us to stop using more crude oil to produce base oil. These are some of the main reasons that attracted the politicians and investors into this industry. It should also be noted that the most important part of a lubricants, in terms of volumetric,is based oil and in terms of weight, onaverage,over 95% of the of the lubricant’s formulation is made of based oil too . Many countries such as USA, Canada, Britain, France, Italy, Brazil, ... supply their base oil by re-refining the used oil. Products produced using this process are based oil, industrial distillation fuel and asphalt residue . 1. Based oil: according to API , Group I standards, based oil is an excellent feed to formulate a wide range of oils such as: Engine oil, Turbine oil, Hydraulic oil,Gear oil, Grease and so on. 2. Industrial distillation fuel: This product can either be used as an alternative to light fuel in boilers or, in industrial flame heaters. 3. Asphalt Residue: This type of Residue contains a lot of polymer and metal which can be used in producing asphalt for street, ISOGUM, or as fuel in Cement producing plants. The other reasons for Used Oil Re-refining : *Preservation of natural resources such as crude oil (42 liters of crude oil is needed to produce 1 liter of base oil). * Less reliance on other countries resources. * Saving the ecosystem of underground waters, rivers, lakes, seas and oceans from the pollution which the used oil can cause. * Reducing environmental hazards caused by used oil. *Saving energy (energy used to re-refine used oil is between 50 to 80% less than using crude oil). *Preventing green house gases. Advantages of this Re-refinement method as opposed to other methods of Recycling. * Compatible with environmental standards. * High production efficiency (No corrosion, rust or coke formation). * Product placement in groups (API I & API II). * Without any acid or clay additives. * Using less energy. * Reduce production and workforce procedure. * High separation rate (removes contaminants and produces high quality base oil). * High output production, over 90%. * Short contact time with hot surface (only a few seconds) * High heat transfer in membrane. * Evaporation at low temperature. * High thermal transfer coefficient. * Low pressure drop during evaporation. * Maintenance of oil properties and its quality. * Self-cleaning features. * Suitable for high viscosity and viscous fluids. * High economic benefits. * Control and removal of toxic and foul-smelling chemicals Process description of Niroonamad Re-refining plant. In this method, the oil first passes through the primary filters to remove unsaturated contaminants. Then, light Lube cut, which is made out of water, gasoline and petrol, flows through a vacuum distillation column and after water and diesel separation the combined vapors are removed from distillation tower. Afterwards, these vapors enter the separation column, Where water and aromatic compounds are separated from diesel/kerosene. The column outlet stream,which consists of light lube cuts flows through a condenser. Then the residual hydrocarbons that have been dehydrated are sent to Wiped Film Evaporator for the separation of heavy and light materials from oil. Light Hydrocarbons are first evaporated in Wiped Film Evaporator and oil enters a condenser and sent to a storage tank. Also, heavy hydrocarbons flow through a condenserand are sent to a storage tank. The rest of the materials wich consist of solid and bitumen waste, settle down at the bottom of the Wiped Film Evaporator.
Company name :
Niroonamad
Packaging :
Minimum order :
1
Standard :
Production power :

Tell us what you want to buy