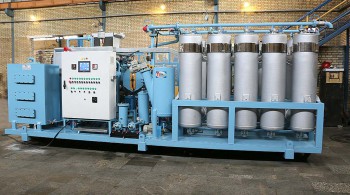 Model :
Description :
Transformer oil regeneration systems are used to remove chemical and physical contamination of transformer oils and are able to filter and recycle transformer and insulation oils on site either online or offline according to IEC 296 standards. This systems are fully automated and are designed and made either stationery or as a mobile unit. The importance of system usage Electricity has one of the most important roles in the economy of any countries industrial growth. Without electricity, humanity is back in Dark Ages. Once produced in the power station, then getting it to the end user without failure becomes the most important factor. This is where transformers comes in and of course, where would a transformer be without the oil which makes it run without failure provided the oil is kept maintained. Transformers are expensive and any small failure, could cause power shortage and in most cases, transformer failures are due to the quality of the oil which makes it function. Maintaining the transformer oil will not only help to increase its life expectancy but also, replace the needs to change the aged oil with new. In other words, we are talking cost and how to keep it down and this is not mentioning the polluting effects of the old oil on the environment. After a period of time, inside the transformers, a number of things start to pollute the oil. These are due to the presence of copper catalyst, iron casting (Iron particles), partial discharges, .. and specially, the penetration of moisture with oxygen and add to these, the effects of heat levels in the transformers which cause the destruction of both oil and the transformer. Here, oil purification (decontamination and filtration) is no longer a solution and we have to use oil regeneration. In this method, after regenerating all the properties of the oil, it turns into a new oil which is in accordance with IEC 296 standards. Some of the unique features of these systems which make them different to others is their ability to be mobile (they are set on a vehicle (according to their capacity they can be set on a small van or on an 18 wheel trailer) and taken to the site) and at the same time to recycle oil and charge antioxidants when the transformers are online (meaning, they do not need to be turned off). Please note, in other methods, colored soil is used and that causes 3 to 5% of the oil to stay in the soil and get wasted. Added to that, the soil itself becomes environmentally hazardous due to the fact that . It now contains an acidic substances with dangerous water compounds that causes irreversible damages once thrown out. The function and the ability of the System with IEC296 Standards which based on the initial acidity 0.2 Mg KOH/g, and looking at the above table, it is possible, that once the used oil is recycled and regenerated, it even achieves better parameters than it’s original state.
Company name :
Niroonamad
Packaging :
Minimum order :
1
Standard :
Production power :

Tell us what you want to buy